UPDATE: We would like to thank everyone for their support and prayers during Brian's continued health issues.

​In 2003 Brian became permanently disabled with a complicated form of  Trigeminal Neuralgia. After countless medical tests, he underwent a procedure where a metal halo is screwed into the scull and radiation is injected at the nerve. Unfortunately the procedure fell short of the desired result and caused additional problems. Brian now lives with constant discomfort and pain which is similar to slamming a finger in a door as well as the periodic electric shock or sharp stabbing occurring in the face and head.

In 2017 Brian became critically ill. He experienced extreme vertigo and severe flu-like symptoms for an extended period of time. He could not be left alone and required 24/7 care. Many days he had to stare at a single spot on the wall all day and night or risk getting violently sick. During one two week period he lost 40 lbs. He would get dizzy even if he closed his eyes and tried to sleep. An MRI revealed that a small mass near the brain stem, that had been discovered years prior, was suddenly growing and deviating the brain stem. In October, Brian was admitted to UCI medical center where Dr. Frank Hsu and his staff performed life saving surgery, successfully removing a tumor the size of a fist. Because of its location, the tumor damaged the main balance nerves. With therapists and his wife help, he has had to learn how to do all of life's basic functions all over again and again. He needed to learn how to chew, swallow, look around, talk, sit, stand and move. He lost complete hearing in his left ear, uses a walker to get around, and still continues to suffer from TN but he is considers himself blessed.

In 2018, Brian suffered a life threatening blood clot just months after brain surgery. He endured 3 more procedures during the first week of June interrupting his brain surgery recovery and therapy. In April of 2019, he had his sixth procedure within 18 months which required him to once again start his brain therapy over from the very beginning.

Brian continues the long extended rehab with the help of his wife and dedicated therapists at West Coast Spine and Rehab, Kimberly, Lynne, Carissa and Dina.

We are so very thankful to all the doctors, nurses, therapists and healthcare providers. ​We are most grateful to our Lord and Savior Jesus Christ who is the giver of life and all our blessings. 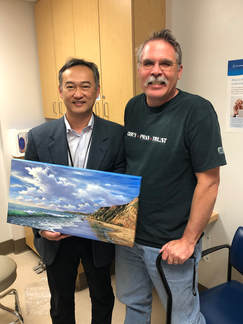 As part of the creative process, I put a part of me into each painting I do. So how do you thank someone for saving your life? It seems a bit trivial to thank him with a painting but a lot more blood, sweat and tears went into this painting than normal. This painting was completed in November 2018 and gifted to Frank P.K. Hsu, MD, PhD Head of the Neurological Surgery Department at UCI. Dr. Hsu is the surgeon who saved my life in 2017. This painting depicts one his favorite places, Crystal Cove beach in Southern California. I am very grateful to him and his team that I am here. The fact that I can still paint is nothing short of a miracle and a blessing. Many Thanks to Dr. Hsu and his team. 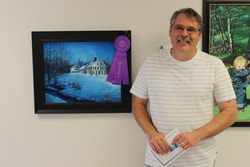 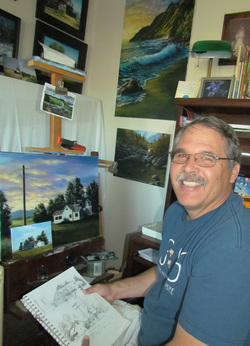 Brian Dietz
The first juried art show hosted by Menifee’s local art organization was billed as “Celebrating our Best of the Best” in visual art creations, and talented local artist Brian Dietz was awarded “Best of Show” for his “Winter B & B” painting.
Art was once a livelihood for Brian Dietz – now it’s his lifeline. After being diagnosed with a complicated neurological disorder called Trigeminal Neuralgia, he had to resign from his regular graphics and marketing position to focus on his health. He continued creating artwork as a form of therapy.
“Since becoming disabled I was determined to not become insignificant,” he said. “It was important for me to use my situation the best I could.”
A Menifee resident since 2006, Dietz has also been named November’s Artist of the Month by Arts Council Menifee, which he joined more than two years ago.
“Brian is a gifted artist,” said Linda Morrison, co-chair for ACM’s Visual Arts Division. “His paintings are realistic and he captures the magical scenery and light in his beautiful landscapes.”
Dietz is inspired by the outdoors and works from many different sources to create works in various medium. He said sometimes the subject matter dictates the medium and other times it’s the environment.
“Whenever I go anywhere, I am always looking to collect subject matter and inspirations for paintings,” he said. “My wife and I just returned from a long awaited trip to New England. I was excited to visit the same areas where artists such as Andrew Wyeth, Thomas Cole, Albert Bierstadt, Winslow Homer and Edward Hopper painted. It was truly inspiring, yet I can still be awed and inspired by a Menifee sunset, a Murrieta oak tree, a Temecula winery or a San Diego Beach.”
He prefers to work from his own sketches and photographs but will use other reference material to better understand a subject, if necessary.
“I love to paint plein air whenever possible. It is a great way to learn to capture shapes, color and values quickly. Sometimes a simple watercolor at the beach can lead to a nice oil or acrylic painting back in the studio,” said Dietz, 54. “If somebody can look at one of my paintings and feel enjoyment and feel like they are there, that’s my goal.”
All of his formal training in art took place more than 30 years ago.
“You never truly lose that passion to create,” Dietz said. “It may get misplaced from time to time but deep down the tendency is still there.
He said there is as much mental stress as there are physical issues with a disability.
“People often identify with each other based on the work they do and their jobs. Becoming disabled you are quickly removed from that social network. Battling depression is common,” he said. “Trigeminal Neuralgia is triggered or worsened by things like fatigue and stress. Many of the side effects brought on by the medication to control the pain can cause mental as well as additional physical issues. Practicing art became a natural outlet for me.”
He believes that God allows challenging things to happen for a reason and that his main purpose here is to serve Him.
“I feel that my condition has allowed me to focus on my art in a way that has allowed me to improve my skills and help others,” Dietz said. “Painting is a process which requires patience and understanding. Slowing down to paint a picture can be very therapeutic. I love to paint pictures of places where I imagine I can see myself being. In a way it helps me transport myself to a very relaxing place.”
The time he can devote to his art varies depending on how he is feeling at the moment. But he tries to manage his time as efficiently as possible and has learned to appreciate the process more and pace himself better.
“I consider myself way more fortunate than most,” Deitz said. “I have a family that cares about me. I am able to get up, take a walk, see my kids and granddaughter, work on a painting, kiss my wife, worship my Lord and live in a free country just to name a few.”
Morrison said that Dietz is always willing to share his artistic knowledge with other artists and added that his recognition as artist of the month is a well deserved honor.
Although Dietz is not able to be as active with ACM as he would like, he said being involved even a little bit is better than not at all.
“It helps give me a sense of purpose. I am able to connect with other people who have a common passion for art,” he said. “Menifee has some great artists who are really wonderful people with impressive backgrounds. I am always humbled by the level of talent at the shows. I am truly humbled by the recognition.”
Dietz said ACM’s new space at 29995 Evans Road in Menifee is a great addition to the community for the patrons and artists alike.
“Now that we have a permanent space, I hope that more people from the community take advantage of the opportunity to visit the gallery and see some inspiring art,” he said. “Art can do such tremendous things. Every painting is like an exercise to learn something or at least understand what I can do better.”